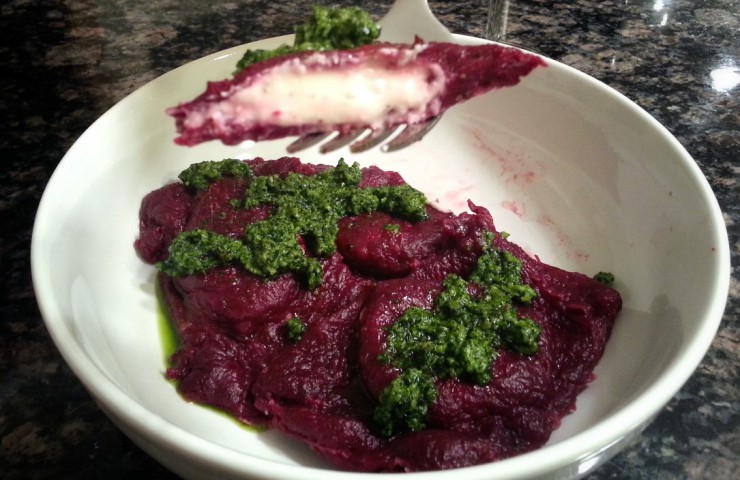 I’ve developed a bit of an obsession with beets as of late. I didn’t like them as a kid and never really gave them a second chance until last summer when I received some in our CSA. I instantly changed my mind about them; I couldn’t, and still can’t get enough of them. Not only do I enjoy them as a snack, I’m pretty sure beets helped me survive while studying for my PE exam on nights I didn’t have time to make dinner. Weird, I know, but they are delicious.

Recently, I started branching out a bit and eating beets with other ingredients. Beets in salads and beets with balsamic vinegar, goat cheese and glazed pecans are two of my favorite dishes. If you haven’t tried beets with goat cheese, drop what you’re doing and go try it. It really is one of the best combinations ever.

I was browsing on Pinterest not too long ago and saw a recipe for beet ravioli. I was completely intrigued. I had no idea this was a thing and I knew I had to give it a try. I followed the recipe for beet dough and created my own ricotta and goat cheese filling. I also whipped up a batch of basil and kale pesto and served it on top. It was incredible.

Preparing the ravioli was time-consuming, mainly because I had never made homemade ravioli before, not to mention homemade beet dough. I learned a few things along the way that should help the process run smoother and faster next time. I’ll be sure to share some tips throughout this post.

The first step in making the ravioli is roasting the beets. I used 6 medium to large-sized beets and had more than what I needed. If the beets are smaller, 6 should be about right, otherwise use you might want to use 5. Preheat the oven to 400°F. Cut the stems off the beets, then scrub them and rinse clean under water. Toss them in olive oil and season with salt and pepper. Place the beets in a roasting pan and roast, uncovered, for 45 to 50 minutes, or until soft. I roasted mine the night before I made the ravioli to save time the day of. Once the beets are cool, peel the skin off and dice into small pieces. I ended up using a peeler because I was struggling to get the skin off.

Next time I make beet ravioli, I’m going to peel and dice the beets then boil them instead of roasting them. I think it should work just fine as long as I allow time for them to sit in a colander and “dry out.” Getting rid of the excess moisture will be important to maintain the texture and consistency of the beet dough.

In a food processor, combine 1 cup of the diced, roasted beets with 2 1/4 cups of flour and 1 egg. Pulse until the mixture forms a ball of dough. Carefully transport the dough onto a well floured surface and knead for several minutes. My dough was quite sticky, so it didn’t form a ball in the food processor as you can see. I added in extra flour as I was kneading and it seemed to do the trick. Wrap in plastic wrap and set aside for 30 minutes. 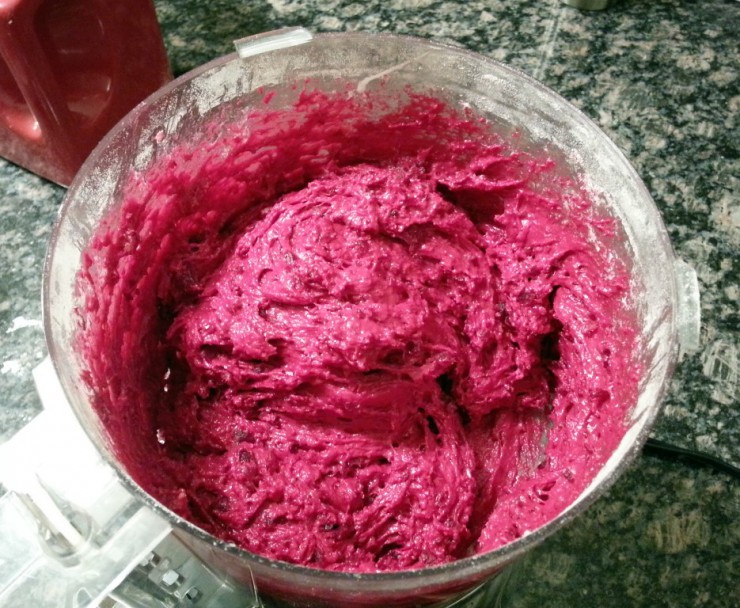 To make the filling, combine 1/2 cup ricotta cheese, 11 ounces goat cheese and 1 egg in a small bowl and mix well. 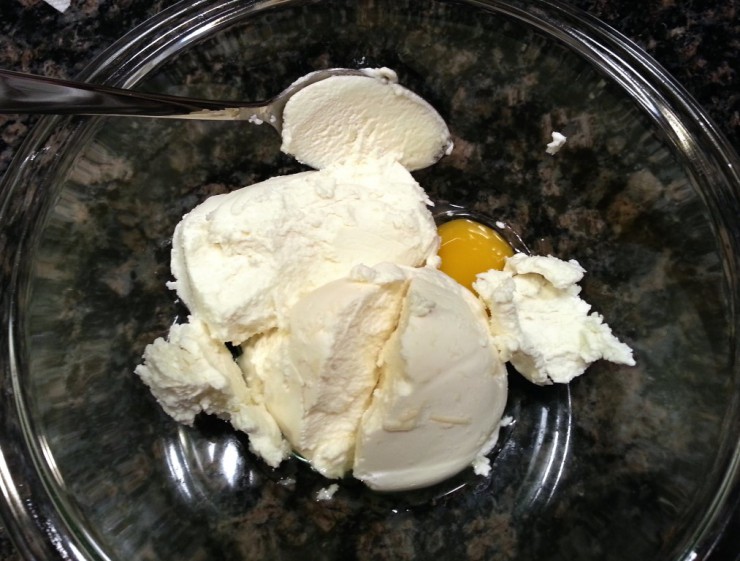 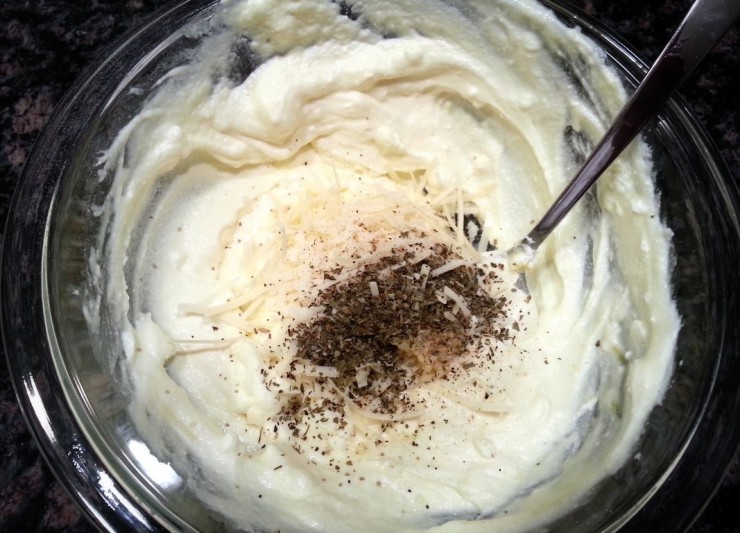 After 3o minutes, divide the beet dough into four equal pieces. As you can see below, I halved my dough and ended up with really large, wide pieces. Quartering the dough will produce smaller pieces and will support using a single row of filling (I’ll explain more in a bit).

I don’t have a pasta maker, so I used a rolling pin to thinly roll out the beet dough. It worked just fine, but I can imagine the pasta roller would expedite the process and produce “prettier” looking ravioli. You want the dough to be thin, but not too thin or the ravioli filling will burst through.

Lay out the four pieces side by side. The filling mixture will be placed on two of the dough pieces and the other two pieces of dough will be used to cover and seal the filling. Begin placing small amounts of filling in a single row along the center of the dough, making sure you leave ample space between each one so the ravioli can be sealed and cut. 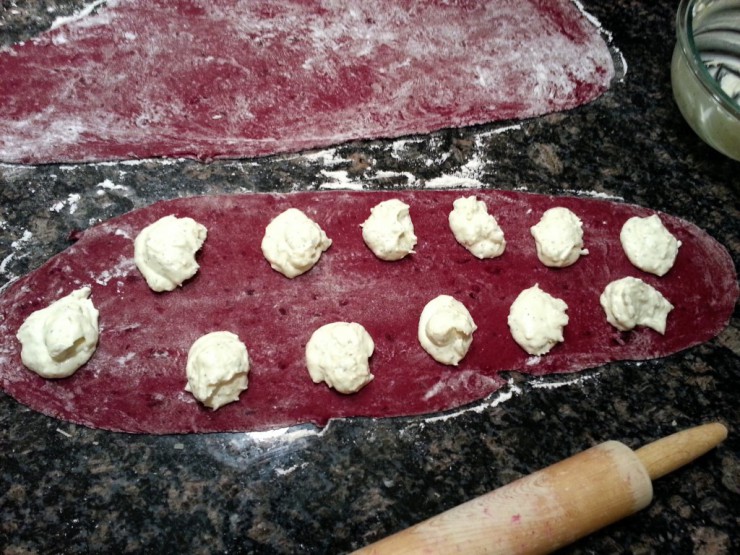 Beat 1 egg in a small bowl to use for an egg wash. After placing the filling on the dough, brush the egg wash around each pile on all four sides. Carefully place the remaining dough on top of the dough with the filling. Firmly press down along the egg wash to seal the filling inside the beet dough. Use a ravioli cutter (or a serrated knife) to cut the dough along the sealed areas to divide into individual ravioli. 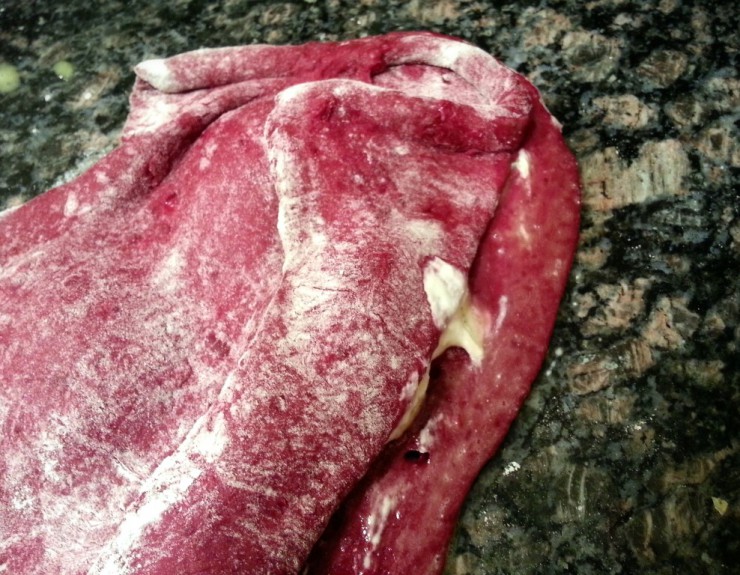 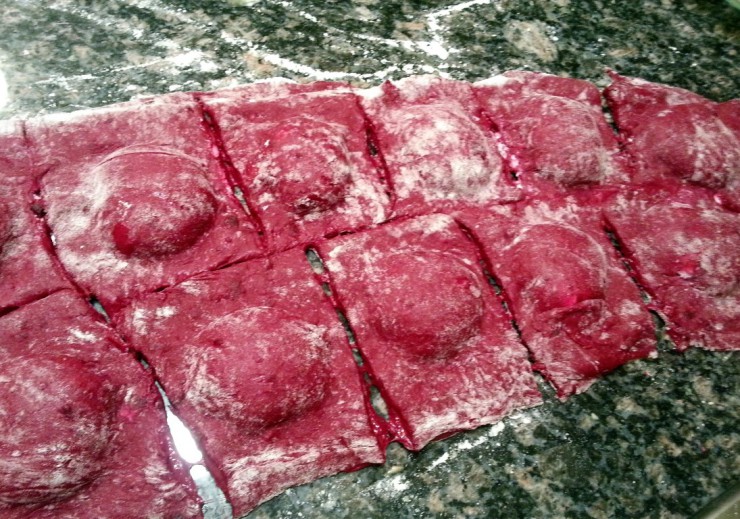 Bring a large pot of salted water to a boil. Carefully place the ravioli into the water, working in batches (I did about 4 at a time) so they don’t stick together. Cook for 3 to 4 minutes, until the ravioli float to the top of the pot. Use a slotted spoon to remove each ravioli and transfer to a serving plate. 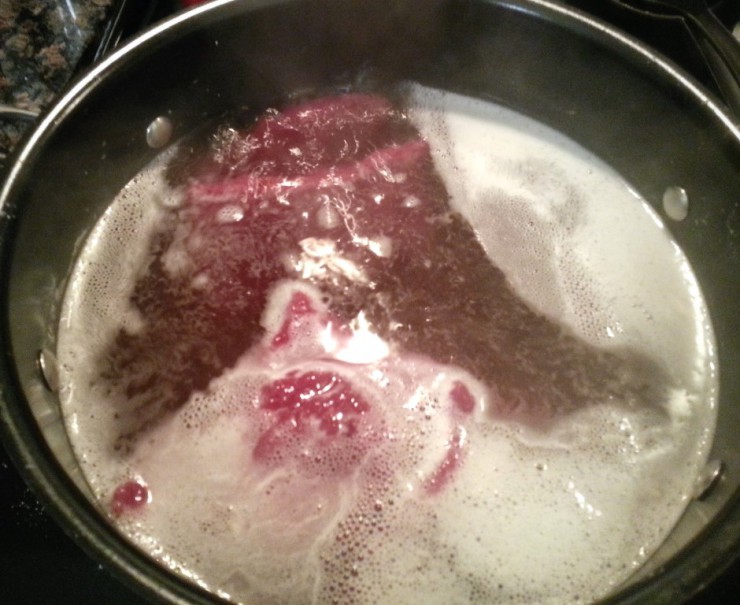 Top the ravioli with a fresh, homemade kale and basil pesto, or your favorite sauce and serve warm! 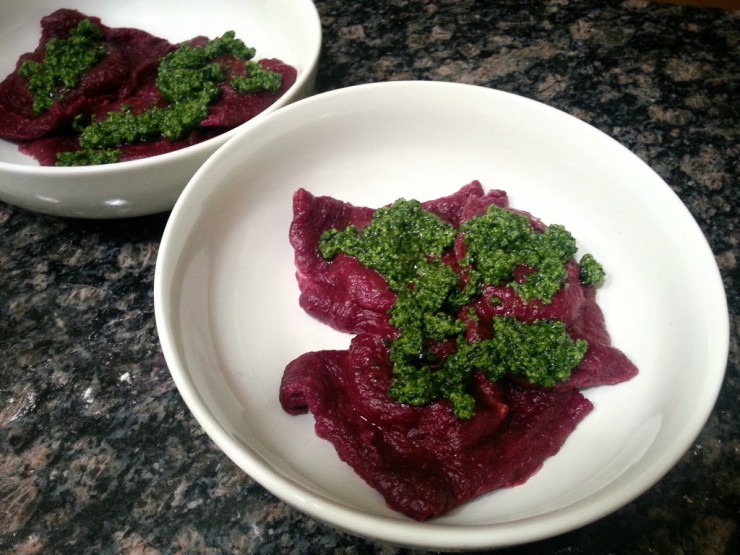 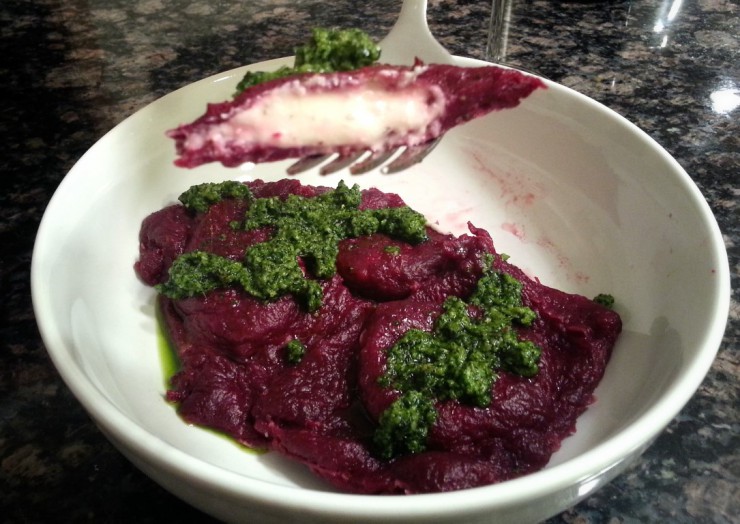 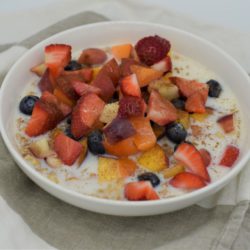 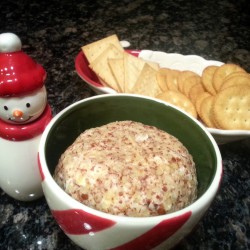 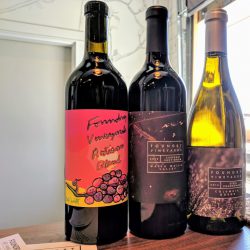 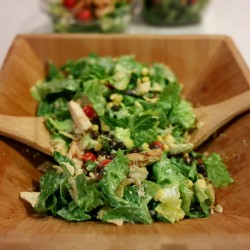